As we all spend more time at home, we are having fun experimenting with food and wine pairings. The famous British wine writer Hugh Johnson once said that "wine carries geography with it, so wine drinking can be a great way to travel, especially when one has to stay home". 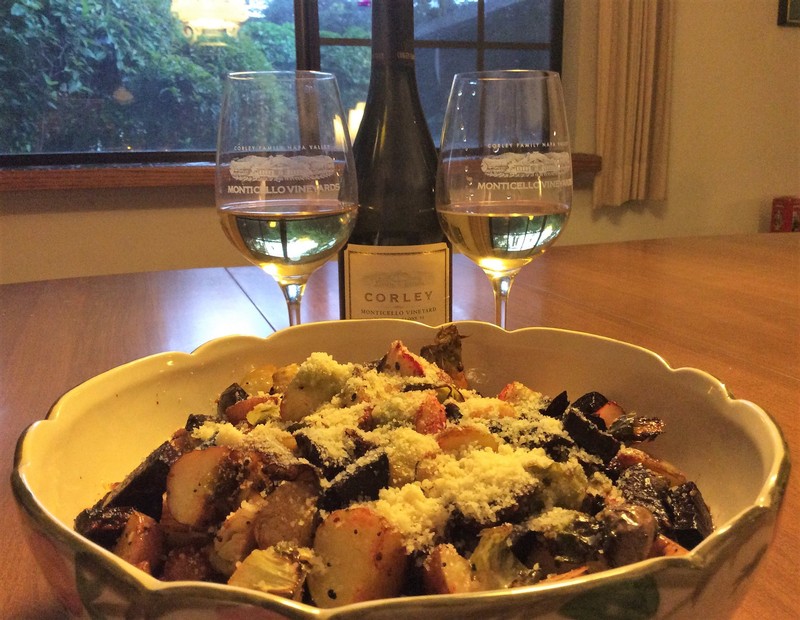 By: Pawel Cetlinski, Wine Educator at Monticello Vineyards for 2+ years

Beets and wine? Sounds odd or even contradictory. In the USA, we have come to see beets featured more and more in restaurants, often served with salads or cheese. Now is an opportune time to serve them with wine! This food and wine pairing I hope provides inspiration to put the wholesome veggie back on your plate. It’s a scrumptious mesalliance!

Where I come from, which is Poland, beets are one of the staples of our cuisine - like in many Eastern European countries. Any Polish grandma would roll her eyes when seeing beets sold in organic aisles as some kind of superfood. While Poland is definitely not a wine country, there are some German-influenced wineries of the southwest. I have experimented with paring Polish white wines and foods, including beets in the past. Nothing compares to the CORLEY Chardonnay and this beet recipe.

My wife, a native of California who lived in Poland for 10 years and also a long time friend of the Corley family, invented this simple recipe that combines a mix of European veggies, and it is a perfect match for the gorgeous 2018 CORLEY Chardonnay from the tiny Block III behind Monticello’s Jefferson house. (Come visit us and I’ll be happy to show you the actual block!) The acidity of food and wine pairing is the key. Beets provide sweet and acidic flavors which, combined with salt, are a perfect match for a balanced fruity wine. The meticulously measured  “butteriness” of Corley Chardonnay works like honey in the dish!

Get ready for a journey of flavors throughout Europe. We begin our food travels in rural Poland with sweetness and a hint of sourness - grab some beets. Next, we fly to the capital of Belgium and add brussels sprouts, (Yes, the name comes from the fact that they were cultivated in Brussels.) The burssels sprouts add a touch of bitterness - just like hops in Belgian beer - as well as the crunchiness of Belgian fries. Fly to Ireland to add the potatoes, the core of the dish. However, potatoes were brought to Poland by an Italian Queen Bona Sforza, so for the final touch we have to sprinkle a healthy amount of grated Parmesan cheese on top. From the shores of Europe, we fly to California’s Monticello Vineyards (that's a long flight) for the wine pairing. Our superb fruity Chardonnay boasts flavors of apple, pear, citrus, and a touch of vanilla. It’s like adding butter to finish your dish.

Preheat the oven to 385 degrees F.

One of Thomas Jefferson’s great friends was a Polish general Thadeus Kościuszko, whom Jefferson called “The Purest Son of Liberty”. I wonder if Kościuszko and Jefferson had beets and wine together…

This is a guest blog post by Vintage Wine Taster and good friend Ray Conti. Ray and his wife recently took a trip to the Monticello winery on Big Ranch Road in the Napa Valley. They escorted two friends who own a dairy near Santa Fe, New Mexico.

Their two Santa Fe friends, Ed & Michael Lobaugh, own The Old Windmill Dairy® just outside of Santa Fe, New Mexico. They make a wonderful variety of artisan goat and cow cheeses. At a Wine & Cheese festival in Carlsbad, Monticello Vineyard's Stephen Corley approached them and indicated the winery might be interested in combining the Monticello wines with their Gouda cheeses. Monticello sent a case of their wines containing three varietals: Estate grown Chardonnay, Pinot Noir, and Cabernet Sauvignon.

Monticello is a small winery by Napa standards (15,000 cases), but their quality makes up for the small quantity. Jay Corley founded the winery in 1970 and today sons Kevin, Stephen and Chris Corey are operating the winery. Kevin oversees the operation, Stephen is in charge of sales, and Chris is the winemaker. The winery lies just above the town of Napa. It is on Big Ranch Road that can be accessed from Oak Knoll Road. They have three lines of wine: Corley Reserve, Corley Family wines, and Monticello Reserve wines. Their specialties are Cabernet, Pinot Noir, Merlot and Chardonnay. The friendly tasting room is opposite a 1/3 scale replica of Jefferson's Monticello; a tribute to America's first serious wine collector. This is a fun place to start a wine tour of the Napa Valley

About the Cheese Project

This is the process used to infuse the Monticello wines into the Gouda cheese. After the initial stages to develop the curd from the cow's milk, the mixture is pressed into wheels. After 12 hours the cheese hardens sufficiently it is removed from wheels and is transferred to a vat brine mixture of wine, salt and purified softened water. After several days the cheese is then removed and dried on a rack at room temperature. All these steps are done by hand and the length of time is determined by how the cheese feels to the touch and how it tastes and smells. Once the cheese develops an oily dark surface, it is hand waxed with a clear wax and than a dark red wax. After the wax is dry, the cheese is transferred to an underground cellar and aged at a temperature of 54 degrees Fahrenheit. The Monticello cheeses were aged for 60 days. The flavor results in a moister, creamier yet mild flavored Gouda. When aged for approximately 5 months, the cheese will develop a more robust flavor. Each of the Monticello wines will create a very different flavor in the Gouda cheese.

This is an ongoing project with much experimentation to get the perfect wine-flavored Gouda cheese. Ed & Michael Lobaugh are eagerly waiting to see what the Corley family thinks of this young batch of Gouda. The hope is that the project will result in cheeses the Corely family will want to feature in their tasting room and possibly sell to Napa Valley restaurants. We will be sure to get back to you when the results are in and indeed if this Gouda is available for sale.