There's something magical about Pinot Noir. It has an allure that seems to entice anyone within striking distance. Like a great relationship, this varietal engages your whole range of emotions. We feel anticipation when the clones and rootstocks are selected and the plants go in the ground. We feel a slight nervousness during fruit set, hoping it goes well. We feel excited when the plants are growing healthily and the tight little clusters of dark black berries are forming on the vine. We feel anxiety when the skies darken towards the end of the growing season because we know that these tight little clusters of thin skinned grapes don't always do so well in the rain. We feel energized when we see the grapes rolling across the sorting table, the little stem fragments (called "jacks" because they resemble the childrens toy of that same name) being carefully plucked out by a fluttering of eight sticky, wrinkled, calloused hands. We feel ecstatic when we stick our head in the top of the tank and smell the wonderful juicy aromas of dark berries and sweetness that wafts in the headspace of the tank. We feel a thrill when we plunge our bare arms into a bin of fermenting must, and the grape skins crawl up your arm, and the seeds get stuck between your fingers, and you realize that you just connected with a wine through your fingertips. Thats magic. Thats what we love about pinot noir. And thats what we did at Monticello this past week/

We've just finished picking all of our 2011 Pinot Noir. We grow four unique clones (sub-designations of the varietal) in two different blocks on our Home Ranch at Monticello. The fruit this year tastes great. We picked a few weeks later than usual, but at similar brix. Basically that means that we enjoyed three extra weeks of flavor and tannin development without the brix getting too high. As a result, we're looking forward to some really great Pinot Noir from 2011 that is full of rich dark fruit, ripe tannins and moderate alcohols. In other words, I think it will be yummy. Perhaps magical ... 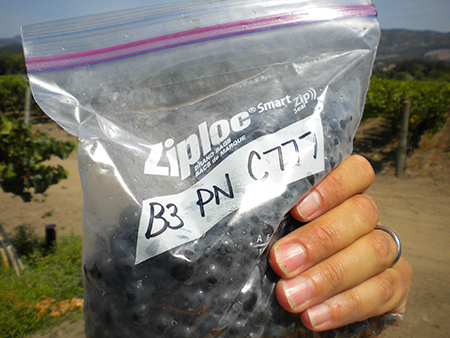 I've grown very fond of plastic baggies over the course of the last 25 years. They always seem to be oriented something that is appealing to me. Over the course of my life, I have tended to associate good things with plastic baggies. As with most aspects of life, my tastes have evolved. I used to be content with the thin sandwich baggies and would be really happy if it was two-fingers deep. Now, my tastes have shifted and I prefer the zipper style freezer quart bag. With age comes higher expectations, so I now fully expect to see four-fingers of product in my baggies. I also don't like to find herbal or green aromas in my sample baggies now, although 20 years ago, this was appealing.

As I do each harvest, I'll keep stomping through the vineyard with my baggies in hand, pulling samples waiting for that special day to pull the fruit. Maybe this year I'll drag an old skateboard behind me just for old times sake ...

Breaking Your Rhythm To Keep It

As the harvest slowly approaches, we have been very busy bottling wine, finalizing barrel orders, and starting to walk the vineyards more often pulling grape samples. This time of year is always very exciting with the fruit in the vineyard approaching ripeness, the activity in the cellar at full tilt and football season starting up. My sons team (7-9 year olds) won their first game of the season Saturday and the 49ers sealed the home opener in exciting fashion with a couple of touchdowns in the last six minutes of todays game. 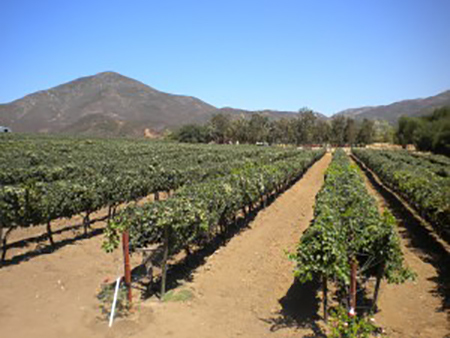 Adding to my personal harvest adrenaline, for the last five years I've been consulting on an wine project in Valle de Guadalupe of Baja, Mexico. It has been a wonderful project to work on as I have had the opportunity to work with fruit in a very different region than I am used to here in Napa. I think this has helped me improve my skills as a winemaker and helped to broaden my perspective, both as an individual and as a winemaker. The people involved in the winery are fantastic. They are a friendly, welcoming, family-oriented group. The owner is the British Consul for Northern Mexico. My south-of-the-border winemaking office in Tijuana is sandwiched between the British Consulate and a whiskey bar. Thats the way they roll in TJ.

I was just down last week to check on the grapes in the Valle de Guadalupe. Its not unusual for us to travel in the consulates armored Jeep Cherokee, which looks like a beater from the outside, but is fully replete with armored doors and bulletproof windows. You'd never know it seeing it from the sidewalk. About halfway to Valle de Guadalupe on a very hot Thursday last week, the engine started overheating. We had to shut the AC off, which meant we were now hurtling through the hot afternoon in an armored incubator with 1/2 inch thick windows that couldn't be rolled down! We were blazing. Just up the road was a military checkpoint. The strategy was show them the British diplomat plates and let them draw their own conclusions about the gringo (me) in the backseat. We went through unquestioned. 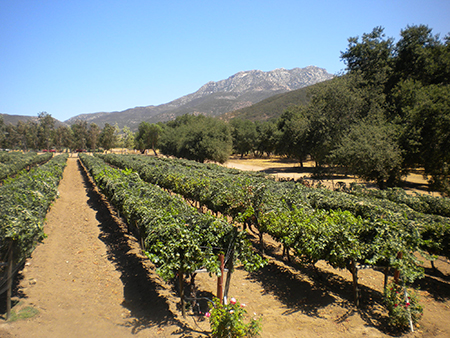 After a few hours walking the rows and sampling grapes at the vineyard, during which time we got the Jeep all fixed up, we made our way back to the winery facility in Tijuana. To my surprise, the winery had a mesquite grill going with carne asada, fresh made pico de gallo and a few bottles of 2007 Pinot Noir, the first wine we bottled down there. They had made me a special lunch for my 40th birthday, which was a complete surprise and greatly appreciated. The power went out about halfway through our party, which we found out shortly was part of a much larger blackout that covered parts of Arizona, southern California and northern Mexico. All the flights that evening were cancelled, so we made arrangements for me to stay the night in Tijuana. Although I had just scheduled to be down for the day, it ended up a being a very productive and enjoyable two day trip. My crew at Monticello managed our activities up north without grief.

I've worked at Monticello my entire life. This will be my 22nd harvest at my family's winery in Napa, the last ten as head winemaker. We are very busy at Monticello, and I'm not looking for more things to do, but something really struck me about this project in Mexico. It was such a unique opportunity, and I was very impressed with the quality of the vineyard and the nature of the people involved. It has been as satisfying as I had imagined and a reminder that, ironically, every now and then we need to break our rhythm in order to keep our rhythm. Here's to a great harvest!