We had an exciting month at Monticello Vineyards in celebration of Napa Valley Arts in April!

Motionsports Artist, Bill Patterson, featured his paintings during the entire month of April in the Jefferson House Cellar and even made an appearance with a live painting demonstration during our Red Line and Red Wine event on April 5.

In addition to the racing theme, Bill’s friend Kevin Chong added a nice bonus to the Cellar with his glass blown art display.

To kick off the event, we hosted a reception to learn the art of painting red line and the art of making red wine! Guests were greeted in the courtyard by the talented local musician, Michael Belair, along with a glass of Montreaux Brut sparkling wine. Bill Patterson and our Winemaker Chris Corley mingled with racing fans and wine enthusiasts during an afternoon of sipping Monticello wine and enjoying small bites catered by Fume Bistro. For those who missed out, you still have another week to view the art on display!

This past weekend, Monticello Vineyards partnered with Sweetpea Catering and Private Chef Services at the Culinary Institute of America at Greystone for the 3rd Annual food and wine pairing competition. Thirty-three wineries from Appellation St. Helena (ASH) paired up with either a restaurant/caterer/chef or a CIA student for a delicious taste-off.

Thank you for all of our cheering supporters and coin droppers!

The year was 1969. Neil Armstrong took his first steps on the moon; the New York Mets were on their way to their first National League pennant; “Butch Cassidy and the Sundance Kid” was topping the year’s box office sales. And an intrepid young Midwesterner, yearning to answer the call of his ancestors, was scouring Napa Valley for the perfect piece of land on which to plant the family flag.

Now, Jay Corley looks back at his 40+ years in the Napa Valley and looks forward to the next generations taking the reins of the Corley Family’s Monticello Vineyards.

In 1969, the Stanford-educated Corley was running a successful publicly traded company in Los Angeles, but wanted to trade his three-piece suit for overalls. After all, farming was in his blood. “Every generation of my family for 400 years has been farmers. As a boy, I loved spending time on my grandfather’s farm in southern Illinois. I just always wanted to get back to farming.”

At the time, Corley’s friend, a wine shop owner in Los Angeles, was developing a piece of property in Yountville. He invited Corley to come for a visit, and Corley was hooked. “I would come up nearly every weekend for nine months to see what was going on here.  I would just roam around, get to know people, ask questions. There weren’t many people around, but the ones who were,” as Corley lists the names of contemporary Napa Valley pioneers and icons, “were very helpful.”

A self-described “Burgundy guy” with a taste for Pinot Noir and Chardonnay, Corley was looking for a place where those varieties would thrive. He found it in an 80-acre prune orchard at the southern end of Napa Valley.

He liked the property’s proximity to the cooling breezes of the San Pablo Bay and the fact that it sat next to the Napa River. “I didn’t think of being on Highway 29 to capture visitors; I wanted to be on the river because I knew access to water would be essential.”

Once the property was cleaned up, Corley didn’t cut corners planting the vineyard. “We used all of the new technology coming out of Davis. We tested the soil everywhere, and we drilled holes in the ground to see how the water was flowing. Then we planted the vines closer together than most people were doing in those days to stress them.” 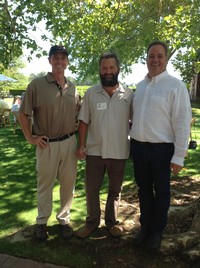 Things went well enough those first years to make Corley think, “We can do this.” Soon the successful winegrower wanted to build a winery. As a graduate student years earlier, Corley had written a thesis on starting up a winery. He opened his desk drawer, dusted off the old thesis, and got started.

All seven of Corley’s children helped out at the winery during their high school years. But Corley encouraged them to go off, experience the world outside of the winery where they had grown up, and then come back if they wanted.

Kevin Corley, now Winegrower and President, became a successful banker in Los Angeles. Stephen Corley, now the winery’s Director of Sales and Marketing, was a CPA who worked at the accounting firm KPMG before he came back to the winery in 1997. Chris Corley, the youngest of the three, has worked at the winery the longest. Initially aiming to be a marine biologist, Chris eventually decided he would “rather drown in wine than sea water.” He worked in the cellar under other winemakers for 13 years before he earned enough stripes to become Head Winemaker in 2002. Now the three brothers form a harmonious management team. “Three of them is better than one of me,” says the senior Corley.

Jay Corley was a great admirer of Thomas Jefferson, who was not only a founding father but also America’s first great connoisseur.  He honored the third President by naming the winery Monticello Vineyards - after Jefferson’s mountaintop home in Charlottesville, Virginia. In 1984, the Corleys built the Jefferson House, a very close replica of Monticello, on the Home Ranch that is now used as office space and to entertain guests. The four acres of grounds surrounding the Jefferson House are comprised of the same trees, shrubs and flowers Thomas Jefferson planted at Monticello.

Savor the Taste, Experience the Hospitality

In the quaint, rustic tasting room, the staff pours a little bit of everything the Corleys produce from 80 acres of vines on the Home Ranch in the Oak Knoll District as well as four other estate vineyards in Napa Valley. With 30 vintages under their belts, the Corleys like to show off their library wines in reserve tastings in the Jefferson House. Slip into the comfortable black leather chairs and enjoy a flight of our wines, “People come for one or two wines,” Stephen Corley says, “but they usually leave with it all!”