The Culture of Wine

"This past weekend, we flew out to College Station, TX to host a series of wine events at the George H.W. Presidential Library and Museum. Mark Burns, a family friend and wine broker for Monticello, has recently put together a fantastic wine exhibit which is on display at the library. It's called ""The Culture of Wine"", and represents the California / Napa Valley wine industry in the 1980s, shortly after the famous 1976 Paris Tasting that put California, and specifically Napa Valley, on the global stage in terms of winemaking excellence. 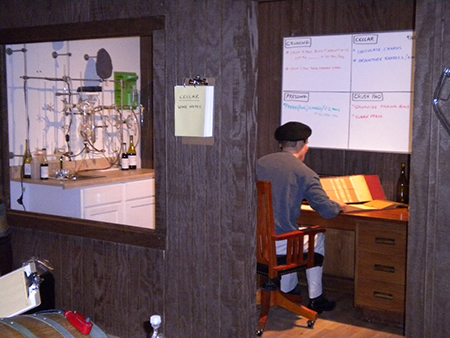 We donated a lot of equipment to the exhibit, which Mark painstakingly refurbished to be put on display. The press in the exhibit is the actual Bucher RPM250 that we used at Monticello from 1981 until 2006, when we replaced it with a current model. I've spent the better part of 15-16 years crawling around in that press, pulling seeds and grapeskins out of my beard and hair. I hardly recognized it after Mark had spent so much time preparing it for the show. The lab equipment, the pumps, and even some of the grapevines in the show are the real deal from Monticello. We're very proud of what Mark Burns accomplished with this exhibit and are proud to have been able to contribute to his efforts. You can see more of the exhibit, including video and photos at www.thecultureofwine.com. 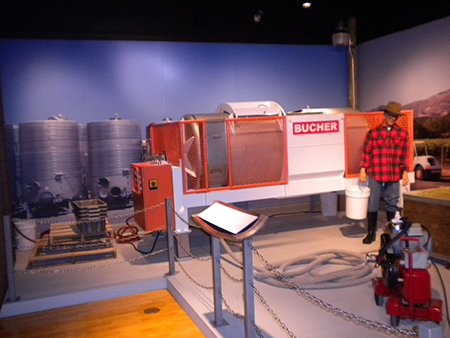 We had a couple of opportunities to host seminars as well. On Thursday evening, I had the wonderful experience of addressing a group in the auditorium at the Library. In addition to the general audience in attendance, we had faculty and students from Texas A&M University that joined us for the evening. I particularly enjoyed speaking to and with the staff and students from the Viticulture/Enology and Mechanical Engineering departments. As I never really went to college, the irony of me speaking to a 'degreed' group of teachers and students was not lost on me.

On Friday morning, we had a really great experience in visiting President George H.W. Bush in his private offices in Houston. After checking in with the Secret Service (they didn't even make me check my beard at the door!) we toured his private offices and visited with his staff and then visited with the President for about a half-hour in his private office. It was an absolute honor to spend personal time with the President. He even gave us a Presidential seal of approval on the wine that we had blended specifically for his Library and Museum foundation - the 2006 Monticello Vineyards Presidential Red Wine - Bush Library Designation. The 2006 PresRed is a blend of Merlot and Cabernet Franc and was tasting great throughout the weekend in my unbiased opinion.

Saturday evening was a lot of fun as well. My brother Stephen and I led a wine-tasting seminar of 8 of our 2006 vintage Monticello wines at the Library and then wrapped up the evening with a tasty dinner in the rotunda of the museum. It was a treat for us to honor two past Presidents at the dinner we hosted - Thomas Jefferson and George H.W. Bush. And I personally was very excited to see the Saints win the following afternoon!"